Tired of unpopped kernels and burnt popcorn? Sick of that yellow salty/greasy artificial “butter”? Upgrade your popcorn experience with these simple tricks and make perfect popcorn by understanding the basic physics behind it. You’ll be rewarded by a healthy, whole grain and low calories delicious snack.

First, let’s look at how a corn kernel pops:

If your corn kernels are a little old, chances are they do not pop properly. Soak them in water for 15 minutes, pat them really dry and pop them.

I tried this simple experiment : I popped 1/4 cup of kernels, then I popped 1/4 cup of soaked and pat-dried kernels. I ate the two popcorn bowls (joking – I saved most of it for later) and counted the unpopped or half-popped kernels. The result? It’s a tie : 10 for the dry kernels and 13 for the soaked kernels (the difference is not significant enough to draw a conclusion). My kernels are still really fresh, so I will have to retry this experiments with older and drier kernels to see if it really makes a difference (but according to Bill Nye the science guy, it does). So, if your kernels are still fresh skip the soaking step.

I learned this the hard way. I was tried to make a no-fat popcorn but it was a disaster. The kernels popped very unevenly, so by the time the last ones popped, the first ones were burnt. Also, they were smaller than usual, and often hard and half-popped. Disaster, I say.

Oil is essential to pop corn kernels on the stove top. Oil promotes an even heat transfer from the pan to the kernels. A heavy bottomed pan also helps for the same reason. I usually use 0.5 to 1 tablespoon of olive oil per 1/4 cup of kernels.

To successfully pop kernels on the stove top, heat the oil and the corn kernels on hi in a heavy bottomed pan with a lid on. Lift the pan, shake it and put it back on the stove top from time to time so that the kernels are heated evenly. Do that lift-and-shake maneuver more often when the kernels start to pop. When the pops are 2 seconds apart, remove the pan from heat and let it cool for a minute with the lid on. Transfer to a serving bowl and salt to your taste. Mmm… 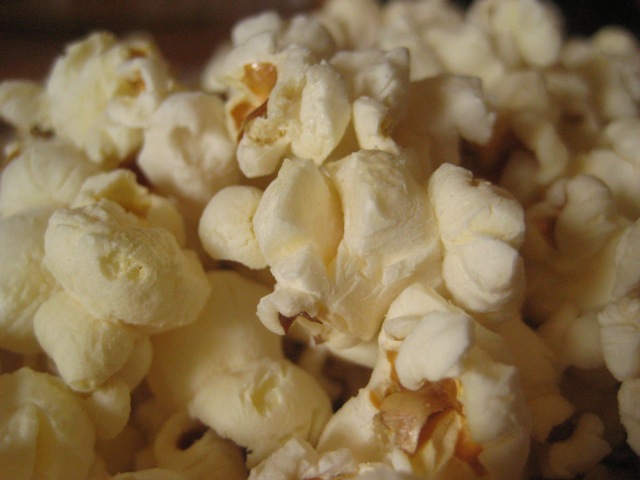