This blog has been silent for a while, partly because I was too occupied with other stuff to knit, partly because I didn’t have a digital camera to show off my work, but it is likely to change soon! I spent a lot of time lately organizing the physics student film festival, where physics students present their own short films, containing at least 15 seconds of physics. I even participated this year! More on that later. In the meantime, I want to introduce you Albert : 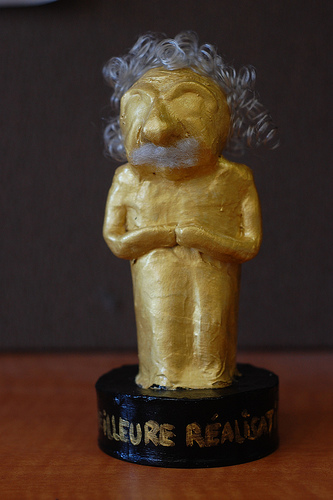 This cross between an Oscar and Albert Einstein is the official prize of the contest. I made it with papier maché, clay, paint, doll hair and, of course, love. (And a lot of time too!)