This set of ladybugs magnet was inspired by the work of Suntaree Palasingh, an awesome artist who makes beautiful decorative - as well as useful - objects using papier maché. This technique might be underrated by people thinking it’s a child craft. But it’s very versatile, cheap and lightweight, just what it takes for this projects. 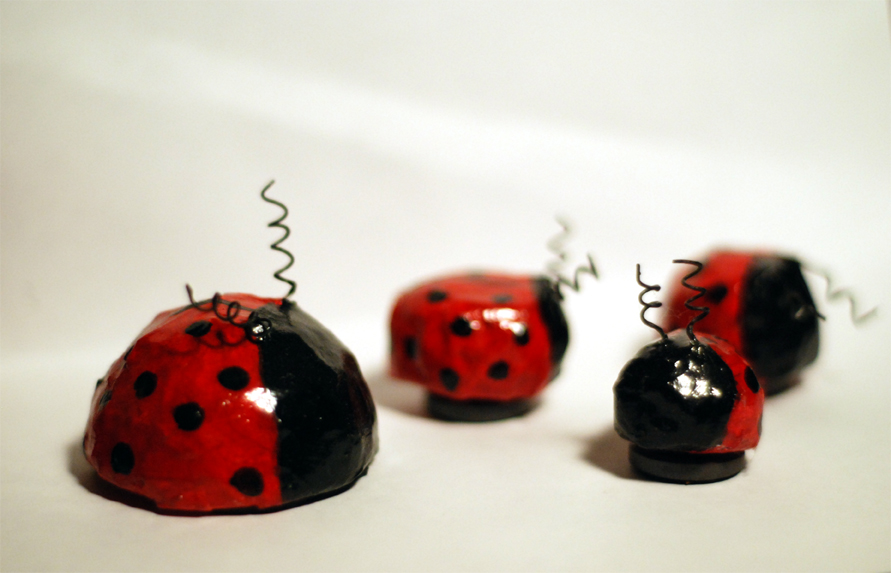 Basically, to make a papier maché sculpture, you first make a structure using cardboard, styrofoam, balloons, empty cans, etc. and solidify it with (a lot) of masking tape. Then, you dip strips of newspaper in a glue made of water and flour and apply several layers of them on your structure, letting the glue dry between layers. Then you paint and varnish your object and you’re done.

There are several glue recipes out there, and the one I use is a very easy and effective one. Just put 1 cup of water into a small saucepan, then add 3 tablespoons of white flour and stir well with a whisk until there are no lumps left. On med-hi heat, bring the mixture to a boil while stirring. Then lower the heat and let simmer a few minutes while constantly stirring until you obtain a custard-like texture. Let cool completely before using. It keeps in the fridge for a few days, maybe a week. Throw it away when you no longer need it, because it will eventually develop molds (yuk).

For this project, I tried two methods for the structure of my ladybugs. I first tried to make a body using only newspaper taped into a somewhat semi-spherical shape. Masking tape is best used here, because the strips of newspaper will adhere to it while it is not the case with other, glossy tapes. The outcome was satisfying, though there were not all alike. The other method was to simply cut a styrofoam ball in half, which led to a much more uniform batch of ladybugs. The drawback though is that you have to buy styrofoam, which is not really eco-friendly, while the all-newspaper ladybugs give you an occasion to reuse materials that you would otherwise throw away. Yes, I’m a sensitive eco-minded gal.

Then I made two or three layers of papier maché on the structure, let it dry and taped the antennas, which are made of florist wire that was twisted a bit around a toothpick to give it’s spring shape. Then I made some more layers of newspaper and let it dry overnight. This is important because when using gesso, acrylic paint and varnish, it seals moisture inside the papier maché, which can lead to problems. The next step was to paint and varnish it, and when it was dry I glued it to a round magnet using a strong adhesive (I should have tried silicon sealer, it would have smelled less horrible). For the bigger ladybug, instead of round magnet I used self-adhesive magnetic tape cut to fit its entire bottom area and it worked very neatly. 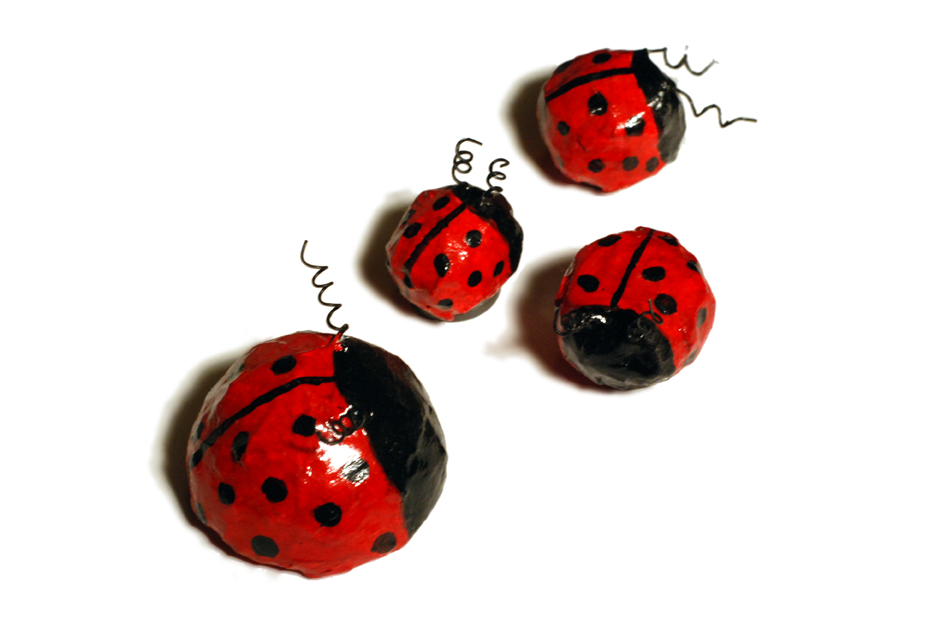 My mother-in-law was crazy about them and made comments every time she saw them on my fridge. So I made a set of ladybug magnets for her. I gave it to her in a small gift box to which I have glued a metallic circle at the bottom (the metal plate that comes with my magnets). I cut leafs out of green construction paper and arranged them to hide the metal and arranged the ladybugs on top so that the leafs won’t move. This small scene was a really nice way to present the magnets.